You're Starting to Bug Me - Vogen Battle Report

The Tyranids and Space Wolves return to the streets of Vogen

After their previous clash with the Tyranids the Space Wolves once again met their alien foe. 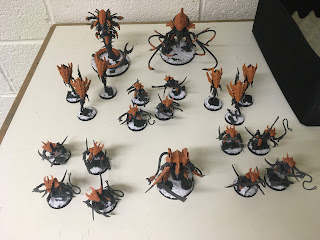 Contact had been lost with a Blood Claw scouting party who were scouring the city of Vogan for any further signs of Xenos life and so the Sons of Russ sent an armoured force to hunt for their missing Brethren. 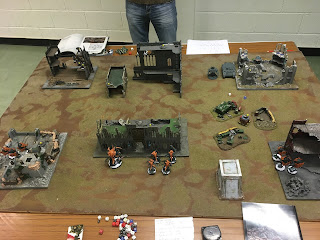 Upon reaching the area of Blood Claws last communication, the Space Wolves were met by a small but psychically powerful force of Tyranids. 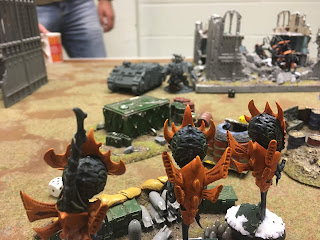 The encounter started off with a long range fire vs psychic energy fight as the long fangs and Zoenthropes targeted each other from distance. With both combatants dug in, this lasted all battle with neither losing all of their numbers. 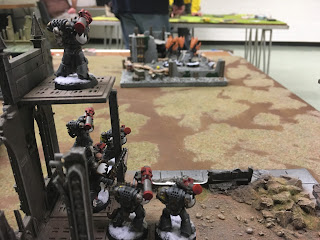 On the other side of the battlefield, the Space Wolf dreadnought also encountered a psychic enemy but could do no damage before multiple glancing hits finally took their toll, enabling the Alien beings to claim a vital objective.
With the battlefield relatively quiet the central Tyranid warriors tried to make a dashing run from ruined building to building only to be cut to pieces as the engine roar and deafening noise of weapons fire signalled the emergence of the flying shoe, who cut down the armoured beasts with ease. 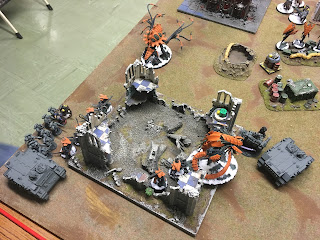 The Space Wolves joy was short lived as their left flank was engulfed by the arrival of more warriors, a Toxicrene and more importantly a burrowing Mawloc who on its own destroyed a full squad of Grey Hunters.
With things looking ropey for the Emperors chosen, the Rune Priest finally managed to manifest his psychic prowess, with he once carefree Xenos now failing to overcome the psykers power and decided to turn their attention to other targets.
As the Tyranids turned their attention elsewhere the mighty flying shoe continued to cause death from above, forgoing the option to drop off he blood thirsty Claws inside in favour of unleashing its arsenal of weapons.
But it was too late for the Wolves. As the Mawloc made its second emergence from the blood stained rubble the Marine commanders elected to retreat from the battlefield and return soon with greater firepower. 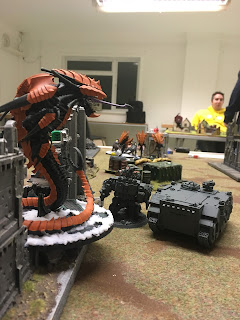 The lost Blood Claws were never found but Rune Priest Bjornsson had gathered enough information to make the next attack on he Tyranids his most bloodthirsty yet.

The Tyranids and Space Wolves clash on the streets of Vogen 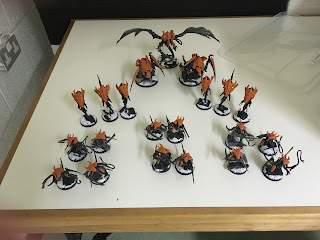 Rune Priest Bjornsson, tasked with retrieving a precious Imperial Relic from within Hab Epsilon led his Space wolves through the quiet streets. Everything was going to plan until the Tyranids of the Fulminar Hive Fleet made their presence known. 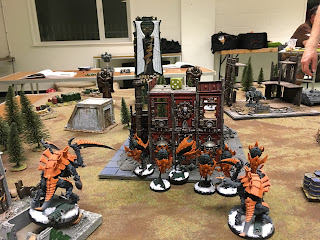 Upon sighting the deadly bio-morphs, the Space Wolves sent their Long Fangs to over see the battlefield, whilst their Wolf Riding warriors and Rhino riding brethren sought to take out the Tyranids in close quarter fighting. 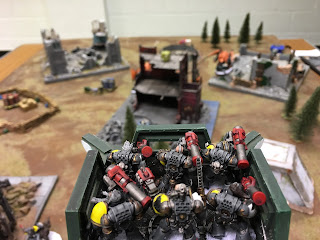 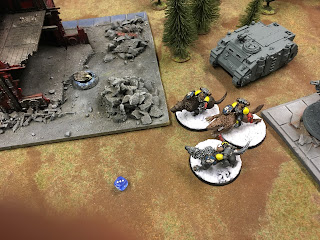 The early stages of the battle saw many Wolves killed by the horrific psychic capabilities of the Zoanthropes, however, once this bombardment was weathered, the orange scaled alien warriors could not take the punishment given out but the Thunderwolf riding Astartes from Fenris, with both Carnifexes being destroyed. 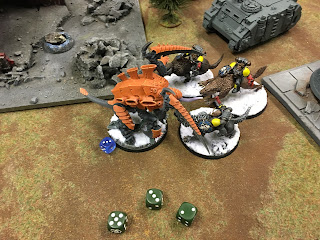 As the battle looked to be swinging in the favour of the Imperium, 3 squads of Tyranid warriors, who had manage to outflank the Space Wolf attack, crashed into the Wolf Rune-priest and brothers in arms, causing many casualties including a mortal wound on the wolf psyker himself. 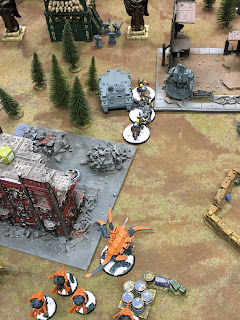 As the Tyranids tore through the power armoured warriors, the Hive Tyrant known as Pesadelo Voando swooped in on wings of leathery skin to snatch the Relic only to be instantly blown from the sky as every Space Wolf bolter, missile launcher and chainsword was aimed in his direction. 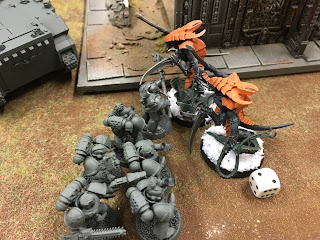 With the massive biomorph smashing into the city streets the Space Wolves were able to grab the priceless relic and evacuate the warzone just in time for extraction.

Victory to the Space Wolves.

Experience rolls still to be made for this game.

Also this round a massive warp storm struck the Vogen area, clearing almost as soon as it had started.
Once the flashes of arcane energy caused by this storm had dissipated the forces of Chaos were nowhere to be seen.........

The first fight of the Campaign took place on Wednesday as the Tau faced off against the Orks.

Before the battle we rolled off for our Warlord traits and I remembered that these would stick for the duration of the campaign (so if you have a re roll option for the formation you're using bear it in mind for your first game!)

Uzgut Foulbowel has "Bellowing Tyrant" trait allowing re rolls of morale and pinning tests to Ork units within within 12". Nice
The unknown Tau Commander of mystery rolled something mysterious (Elliot? I think it was a 6!)

On to the battle, we rolled up the "Escalation" mission, his seemed fitting for a first encounter, and got ready to fight! 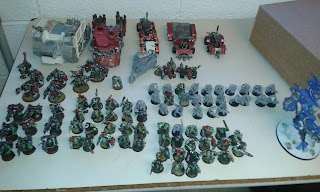 +++++++++++++++++++++++++++
Commander Pal'Ton's Pathfinders had reported a large Ork force had been seen blazing their way to the Imperial's old Basilica. Seeing this as a defensible area the Commander formed his army up on the outskirts of the ancient building and waited.
He could see the large clouds of smoke from the Ork's ramshackle vehicles billowing above the ruins in the distance and knew it wouldn't be long before they were within weapon range....... 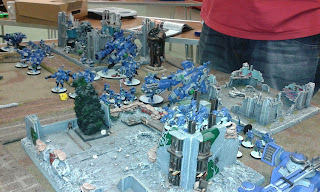 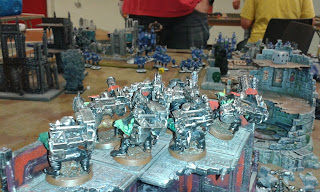 It was long way to the Tau lines (thanks to the lengthways deployment of the mission!) and their advanced guns took a heavy toll on the Orks 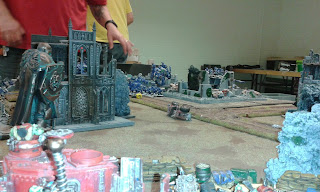 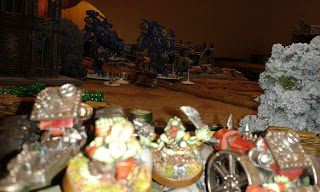 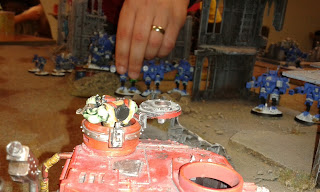 But the heavy Ork vehicles Tank shocked their way through to deploy large Slugga Boy Mobs into the Fire Warriors lines, hitting a Broadside suit in the same combat.
The Mega- Armoured Nobz launched from their trukk and smashed into the reeling Battlesuits wiping out all five for no loss and then eyed up a bigger prize...... 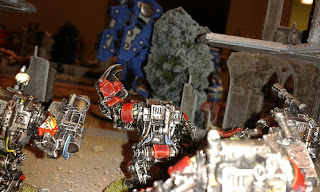 The slugga boyz that had mugged the fire warriors and broadside now had to weather incoming fire from broadside units, path finders and riptides. The cover they clung too was all but useless thanks to Tau markerlights.
But the bloodthirsty Nob managed to hold the 3 remaining boyz to mount a desperate assault on the Pathfinders unit in ruins,,,,, 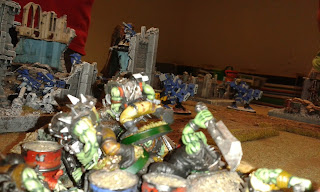 Warlord Uzgut and his depleted unit of footslogging shoota boyz saw their chance for a good fight and with a WAAAGH slammed into one of the riptides as Cragtoof's Choppas hit the other. The Mega nobz hit a fire warrior unit (code named speed bump!). Despite getting lumps knocked out of the them the Riptides remained standing, just, but locked in combat. 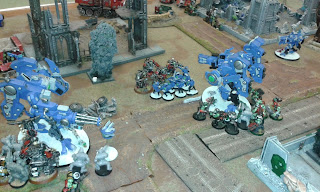 With only the damaged riptides, 2 broadsides and a unit of  Pathfinders (in combat) left on the field the Tau though better of it and jet packed off leaving the basilica to the Orks and the Vogen veteran, Uzgut!

Reminding Elliot (because he has read the campaign rules, sure, sure) we had experience to roll for he chose one of his Riptides to gain a roll on the gunnery chart gaining Tank Hunters.

As the winner I had 2 choices for units and chose Azog's Ardnutz (meganobz) who rolled on the melee table to gain furious charge, however as they already have this skill I was able to pick from the table choosing Fearless instead.
My second unit was Cragtoofs Choppas who gained hit and run (hmmm, not sure that's useful?)

So with no more fighting we move onto the next round of moves and with it a map upgrade! We now have pins! See the key to the right of the picture for army colours. 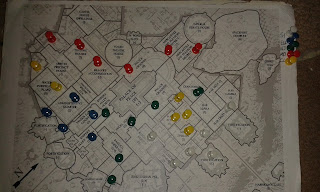 Finally a quick tot up of Victory Point Totals:
Simon 5
Elliot   9
Neil   14 (the basilica yields nothing to a non imperial army!)
Matt  13
Chris  6

Remember - you need at least 8 VPs to attack the Palace.

However the void shield controls are in the hands of the Orks and the shields remain UP!

Posted by Lordybloke at 23:01 No comments: